Most autographs of famous people are acquired deliberately, either by fans of the individual or autograph collectors, or to record a significant event such as a visit. Very occasionally, the autograph is incidental to the document, such as a receipt or a letter, which has then been treasured for its association rather than for its original purpose.

Radley College Archives has acquired autographs via all the routes.

The 1920s and 1930s were the heyday of autograph collecting. The Archives hold two collections, the first is a Birthday Book created by an unknown person and bought for the collection in 1997, the second compiled by Tony Money when he was a boy at the school, in the 1930s, and donated to the College Archives in 1997, to complement the recently purchased ‘Birthday Book’.

The ‘Birthday Book’ contains a remarkable juxtaposition of signatures and drawings, each on the person’s birthday. Family members and school friends are alongside major figures of science and politics, including Rutherford and Marconi, Neville Chamberlain and Mussolini. The unknown collector must have moved in very distinguished circles since it is the book itself which has been signed.

Tony Money’s autograph collection is much more typical and obviously that of a teenage boy. His autographs were collected by queuing at stage or changing room doors, or by the simple device of writing to the person he admired and requesting a letter in return. Thus the autograph albums are scrapbooks. They contain sportsmen, including the cricketing genius Hobbs, and touring England and West Indies teams, and the Arsenal football squad. Contemporary film and theatre stars also feature.

Incidental autographs can be very moving. One of the greatest treasures of the Archives is a receipt sent to A Social. The entire Social clubbed together to send a donation of £2 10/- collected from their jam money to support the British Antarctic Expedition of 1910. Captain Scott signed the receipt, and wrote to thank them. We have kept the receipt ever since.

In 1947 the Queen, then Princess Elizabeth, visited Radley for its centenary celebrations. As part of her visit she had tea with the prefects. This must have been a great relief to the 19 year old princess who is shown surrounded by much older people in all the official photographs. In 2007, Radley Archives were given a letter which she had written shortly after the visit, describing the tea party.

The Library does not, as a general rule, collect signed works. However, visiting speakers are often asked to donate their books, especially if they have spoken about that particular work, and they frequently add an autograph and a dedication. Many books given to the Radleian Collection are signed by ORs. This has resulted in an eclectic set of autographed items. The most notable are the two campaign histories by Field-Marshal Viscount Montgomery of Alamein, El Alamein to the River Sangro and Normandy to the Baltic. Both were presented to the school by Montgomery on his visit to inspect the CCF in 1947. Both are first editions, printed for private circulation in the British Army of the Rhine in 1946, and include campaign maps in end-pockets. These two books have lived safely in Radley since they were donated. 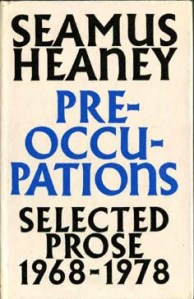 A more spectacular life has been lived by a first edition, first impression copy of Seamus Heaney’s prose work Pre-occupations: selected prose 1968-1978, Faber & Faber, 1980. This was bought new for the Wilson Library on publication in 1980, not as a conscious attempt to buy a first edition, but simply as part of the poetry collection. It is a very rare work by Heaney which has seldom been republished. It was not part of the collection when the contents of the Wilson Library were moved to the Richard Morgan Library in 1996. The Wilson Library, indeed, lacked a comprehensive catalogue and there was no way of knowing that this rare book had ever been part of the collection. A routine check of the internet for Radley College-related items in January 2006 revealed that an item with a Radley College bookplate, signed by Seamus Heaney, was being offered for sale for $480. Discussion with the vendor confirmed that the item for sale was, in fact, our first edition of Pre-occupations, but that the vendor himself, a specialist in Heaney and friend of the poet, had asked Heaney to sign the book when he found it for sale in a London bookshop in the mid-1980s. Unfortunately for him, the book had been stolen. The matter was placed in the hands of the Art Theft Police, and the book returned to Radley within seven days, accompanied by a note:

Other first editions, without signatures, are routinely bought as part of the collection, simply to keep us up to date and, particularly for fiction, at the forefront of latest publications. It then becomes a moot point whether an item which has become valuable should be kept on the shelves. Examples include the first American hardback edition (with dust cover) of Harry Potter and the sorcerer’s stone – because this is the first book in the series it is the rarest; other works are first editions of poetry by Yeats’ and Auden. Occasionally, rare first editions are bought because of their associations: in 2006 a comprehensive collection of the early work of Harold Monro was created.