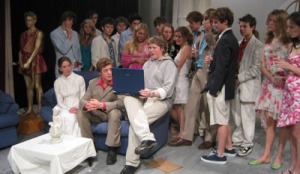 Shakespeare was not part of the nineteenth century school curriculum, but at Radley there was a voluntary “Shakespeare Class” run by Warden R.W. Norman in the early 1860s. This may have originated with William Sewell himself, as part of the theatricals which were regularly staged in the 1850s. The Radleian for December 1866 records the end of these classes and the response to them: the founding of the Shakespeare Society.

The Shakespeare Club
Our readers know that for some time the Shakespeare Class, originally founded by the late Warden, and thoroughly appreciated we believe by all who joined it, has ceased to meet. The want of it was felt, and under the impulse given by the Recitations, it has been found possible to supply that want. Within the last few weeks not only has Shakespeare been the subject of common conversation, but a club has been established, with a view if possible of perpetuating the Shakespearian Mania. It is clear that a club possesses some advantage over a class, being a less dry, less formal kind of meeting. We need not enter into the details of its construction, it is enough to say that it consists of members voluntarily united to increase their knowledge of the great English Poet.

The Society consisted of members elected by ballot, honorary members and Old Radleians, with no limit to the number allowed to join. The inaugural meeting was attended by twenty-four boys and dons, with the new Warden, R J Wilson, as President. Rules of the Society were clearly drawn up from the beginning, including rule no. 3: “the different characters are to be assigned by the President”; rule no. 5: “any member making himself obnoxious may be voted out”; rule no. 10: “no one is to use Bowdler’s Family Shakespeare.”

The purpose of the Society was to perform dramatised readings. The first play to be read was Hamlet. This took three sessions to complete, including discussion “chiefly directed to the species of madness which Hamlet was afflicted with.” In the first year Hamlet was followed by Twelfth Night, then The Merchant of Venice, and Henry IVth parts 1 and 2. The following year the Society embarked upon Love’s labours lost, Macbeth and Henry VIII. By 1883, the Society had completed twenty-six of the thirty-four plays, with frequent repeats of Hamlet, King Lear, Macbeth, and Julius Caesar, and looked for new material in the form of She stoops to conquer by William Goldsmith, and a discussion of the work of George Eliot, and again in 1865 “The Rivals by Sheridan was read again in default of another good piece by a classical author.” Gradually, the Shakespeare Society became the Literary Society, although its primary aim continued to be reading and discussion of Shakespeare’s works.

The Shakespeare Society survived for nearly a century until 1962. The minute books of the Society are in the Archives and detailed reviews of most sessions appeared in The Radleian.

In the 1930s two dons, CPT Wrinch and AK Boyd, established the Radley College Amateur Dramatic Society. They produced most of the school plays until the 1960s. Boyd, in particular, pioneered the performance of Shakespeare on stage by schoolboys. His book on the subject became a landmark textbook, culminating in the early 1950s in a five day national conference held at Straford-upon-Avon. Boyd’s production notes and photographs are in the Archives. Wrinch and Boyd were succeeded by Peter Way, who continued their work on Shakespeare. Peter Way has recently donated a prop from the 1962 production of King Lear: the Fool’s fool. This was probably made by the Marionette Society.