The Natural History Society was the most long lasting of the many societies that have existed at Radley throughout its history. It was founded at a meeting held in the Music School on Wednesday evening February 6th 1884, under the chairmanship of the Warden, R.J.Wilson. The Society comprised six sections, Botanical, Entomological, Geological, Ornithological, Archaeological, Meteorological, each under the care of a Don and a small committee of boys. Membership of the Society was by election, with places severely limited and much vetting of candidates to ensure their genuine enthusiasm. Many of the earliest members went on to careers in the sciences. Distinguished contemporary scientists, including the geologist Adam Sedgwick, gave lectures.

The Society took charge of the Museum which had for several years led an itinerant life in a variety of rooms. The Museum now took on a new lease of life and became a key element in the teaching of science, newly introduced to the curriculum by Warden Wilson: already by March 1884 the Society had received gifts of ‘fossils from the coal’, ammonites and belemnites, a golden-crested wren’s egg, a guillemot’s egg, and part of the American Submarine Cable, whilst ‘other curiosities are also coming in, such as … a rhinoceros-hide slave whip, which will make our Museum a thing of joy in the future’. The hope was expressed that ‘several hundred years hence, it may be interesting to note the contribution of generations after generations of Radley naturalists.’ The fortunes of both Society and Museum fluctuated over the next century. The Museum never found a permanent home but resided sometimes in the Octagon, sometimes in Covered Passage until it was eventually dispersed. However, many of its more important exhibits are now displayed in the Biology and Geology Departments.

The Natural History Society maintained a specialist library, with its own bookplate. Many of its books are still within the Richard Morgan Library. 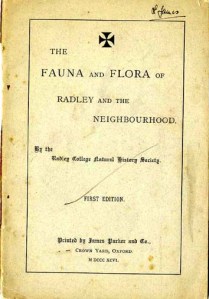 Fieldwork and recording were always as important as collecting, culminating in several publications from the logbooks of the Society. The earliest of these was The fauna and flora of Radley and the neighbourhood, by the Society, Oxford 1906. The Radley District: its history, botany, entomology and geology, followed in 1912, edited by the Warden, T. Field, with specialist sections contributed by Dons and an Old Radleian, M. Odling, who had gone on to become a Fellow of the Geological Society and Demonstrator in Geology at the newly founded University of Leeds. In the 1930s there were two in-house magazines, Field Club and The Radley Naturalist, a tradition that was revived in the 1960s with Scope. During the 1930s Radley succeeded in becoming an official bird-ringing station for the newly created international survey. By the 1940s membership was at an all time low, but small group of enthusiasts, driven by R.M. Van Oss, published a comprehensive survey of local wildlife including an adult tawny owl found in the Singleton Library in October 1949.

Expeditions were held from the very beginning, sometimes modest walks along the river or to Wittenham Clumps. The most extravagant expedition must have been the Radley College CCF East Greenland Expedition led by G.L.Treglown and D.E.Hardy in 1971: this was achieved with the help of the RAF.