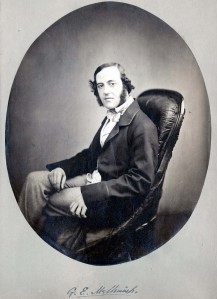 The first boy to enter the school. George Melhuish was born in 1836, the son of John Melhuish of Elmwood, Upper Tooting. He was eleven years old. George was succeeded in 1854 and 1862 by his brothers Charles and John, the first of a family which has sent boys to the school in most succeeding generations, including the present.
George Melhuish had been a pupil of Captain Haskoll for some time before either came to Radley, and it was probably this existing connection which determined the choice to send him to the school so early in its life. Samuel Reynolds recalled that there was a good rapport between the two:

Captain Haskoll took us in French; and I am sorry to say that, except from Melhuish, he had no help from any one …1

George became the first Senior Prefect in 1851-2. As Senior Prefect, he was remembered for having organised a subscription throughout the school towards a new pedestal and ball for the eagle lectern in the chapel in 1851. At the end of August 1851 the crisis between Singleton and Sewell, which would end in Singleton’s resignation, was coming to a head. On 10th September a memorial signed by seventy-two of the seventy-seven boys on the roll, headed by Melhuish, was presented to Singleton:

False reports having been circulated of disaffection and divisions among the students of the College, the undersigned desire to testify their sincere and unqualified submission and attachment to the Warden.2

Melhuish left Radley to attend Merton College, Oxford, where he was Postmaster, and achieved 1st Class Classical Mods. He took Holy Orders in 1858 and served as Honorary Assistant Curate at Bradford-upon-Avon, 1858-64, when his health broke down. He died at Clapham Park in 1874.