Benjamin Kent founded a school for non-conformist pupils a few years before he leased Radley Hall from Sir George Bowyer in 1819. The school continued at Radley Hall for twenty five years. It closed in 1844 under obscure circumstances described by AK Boyd as ‘the master became embarrassed and was compelled to leave’, although Sir George Bowyer’s increasing sympathy for the Roman Catholic Church and his eventual conversion must have caused some tensions for the non-conformist Benjamin Kent.

In the Academy at Radley Hall, Berkshire, conducted by Mr Benjamin Kent, with the assistance of well qualified masters
The advantages of a Grammar School are combined with those afforded by a more comprehensive system of instruction; and while the utmost attention is paid to intellectual cultivation, religious principles are affectionately inculcated; the moral habits are watched over with unremitted care; and whatever may promote the social and domestic comforts of the Pupils are anxiously consulted.

With the view of exciting the latent genius, and of promoting a spirit of liberal inquiry, a select Library is provided, scholastic Disputations are held, and Lectures are given in some of the most interesting departments of Natural Philosophy.

French, Drawing, Music and Dancing on the usual Terms
Washing three Guineas
Or all inclusive excepting Music, on paying Ten Guineas per Quarter in advance
A Quarter’s notice must be given previously to leaving the School

This prospectus indicates that Radley Hall School could be included in the list of experimental schools based on a more liberal curriculum and the influence of religion alongside its contemporary St Columba’s at Stackallan and Monro’s school at Harrow Wheal as well as its successor, St Peter’s College, Radley. It was certainly successful and occupied Radley Hall for a significant period of time. It also indicates that Singleton and Sewell did not visit Radley as a purely speculative move: the Hall had already been occupied for exactly their purpose until a very short time before their visit.

Radley College Archives now contain a small number of items relating to Radley Hall School: a copy of the prospectus; an examination paper; a copy of Sir Walter Scott’s Marmion, Archibald Constable, Edinburgh 1825, awarded as the prize for Classics to Master CJ Tomkins by Benjamin Kent in 1833, and given to Radley College by Mrs CL Stock (née Tomkins) in 1948; and a book of pencil sketches drawn by Eliza Kent, dated Radley Hall 1830 – this was also inherited by Mrs Stock and it is likely that there was a family link between the Kents and their pupil CJ Tomkins.

The drawing of Radley Hall by W. Waite which features on the prospectus is taken from exactly the same point in the grounds as one by Eliza Kent, dated January 28th 1830. Both drawings are the only known representations of the house in its setting after re-modelling by Capability Brown in 1770. The sheep and cattle in a gentle parkland must be what Singleton and Sewell saw on their first visit, and will have inspired Sewell in particular as an Arcadian ideal. 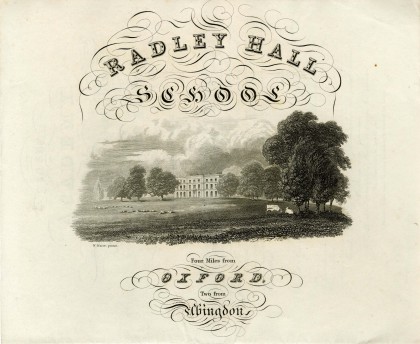