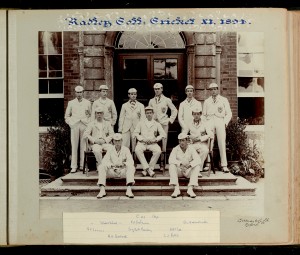 Imperial Yeomanry, who died of wounds near Zeerust on June 9th, was commissioned as Second Lieutenant of the Shropshire Yeomanry in March,

to Lieutenant at some subsequent date.

IT is with great regret that we have to chronicle the death of G. L. Greenshields, who was shot on June 7 at Grootofdeeling, and died on the 9th, of his wounds.

George Lockhart Greenshields came to Radley in September, 1891, and before he left he was in the Cricket and Football XI, acting as goalkeeper in 1894, which was one of our best teams, and won the hurdles. He was a prefect. After leaving in 1895 he went up to Oriel College, and took his degree in 1899. He went into business, and had just been made a partner in his father’s firm, when in February of this year he went out to South Africa a Second Lieutenant in the Shropshire Yeomanry. He was subsequently promoted to Lieutenant. His career both at school, at Oxford, and since, was full of promise, and there seemed every prospect of his leading a good and useful life, but “Dis aliter visum:” he has been struck down at the early age of 24, dying the most noble of deaths for his country. Those who knew him and loved him here will mourn him long, and will feel deepest sympathy with his family in their irreparable loss. Quis desiderio sit pudor aut modus Tam cari capitis?