A bookbinding made of silver/silver gilt metal over dark blue velvet dating from the late 17th -early 18th century. William Sewell bought the bookbinding between 1847 and 1853 in an unknown bookseller’s in London. It is listed in the inventory of 1856 under ‘miscellaneous’ as: A silver mounted [book covers & book] [value] £10 10/-. He had it made into a book with handmade paper watermarked ‘J Whatman 1855’ with gophered (decorated) gold edges.

April 29th 1847
S[ewell] proposed to me this evening that instead of giving books as prizes to the boys, (wh. after all, I believe, no one reads, while they cost a great deal of money,) – we should have a magnificent blank book, in wh. the names of the successful candidates shd. be written with great ‘pomp and circumstance’, – and also a black one, for those who have been seriously idle, or misbehaved, during the preceding term. This ought clearly to be a very grim, horrid-looking affair: a register of evil cannot be black enough. We also thought of a superb book, for the names of those who, on quitting the College, had entitled themselves to the dignity of a place on its pages, by a course of previous virtue & good conduct. These are important thoughts. 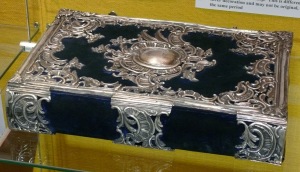 The Black Book came into use almost immediately on the foundation of Radley in 1847: it is mentioned in the earliest letters from boys. The Liber Argenteus had to wait until Sewell took over as Warden in 1853: even then, the book was not ready for use until 1855. The earliest records are dated Easter 1853, but Sewell lists the achievements of boys who had entered Radley under his two predecessors. An entry in the Liber Argenteus carried with it a certificate with the St. Peter device stamped in gold and a copy of the citation. Boys were rewarded for good work as prefects, as the captain of games, for trying hard in class, on one occasion for saving another boy from drowning in the river, and Arthur Sewell who was honoured for never being entered in the Black Book. Entries were made by Sewell, in his own hand, until 1857. Warden Norman then kept the record from 1861-1863.

After Warden Norman, the giving of prize books was introduced at Radley and the Liber Argenteus languished unused until rediscovered by Warden Selwyn who used it as a Visitors Book from 1913 until 1916. His visitors (and their signatures) included G.M. Trevelyan in 1914, and a Serbian professor with party of students in 1916, which was reported in The Radleian July 1916.

See also: an article on the conservation of the Silver Book