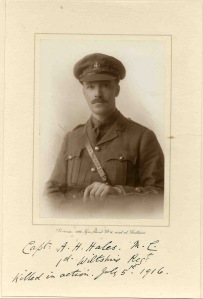 ‘Sam’ Hales was educated at Rugby and Corpus, Oxford, taking honours in moderations and in the final school of modern history. He was in the Rugby School XV of 1900, and afterwards played for the Harlequins and the Monkstown team of 1902. At Oxford he was a rowing ‘Blue’ and rowed in the 1904 and 1905 Boat Race crews. He was an extremely popular teacher at Radley where he was one of the group of young Dons who encouraged the growth of Rugby as the school’s major sport.

He enlisted immediately war was declared in August 1914, as a private. He was awarded his commission ‘for gallantry.’ He won the Military Cross in March 1915 ‘for bringing in the wounded under heavy fire.’

The Radleian published a letter from him describing everyday life in the trenches:

I have heard several times from Mr. Hales, who is sergeant in the Wiltshires. It will be news to hear that, during his first three days in the trenches, even he was absolutely dead beat, as they had to carry up sandbags to mend the gaps in the trenches. His legs absolutely gave out. On the first night he fell into a Jack Johnson hole and was not dry for a week afterwards. Nor could he use his rifle for a day and a half as it was jammed with mud. He is full of praise for the food and bully beef. He has been under heavy fire several times, but he claims to be very good at keeping his head down. When we returned this term we heard that he had been wounded, but his own account is as follows; “A graze on head and arm from a bullet that splintered through a sand bag. Both wounds quite dry by the time I left the trenches next day.’’